A little bit of an overview of our trip before I begin - What else can I say about the Top End region of Australia. It is naturally beautiful, spiritual and in my opinion is all of what is great about Australia - It really is such an amazing, unique experience - It has it all - natural beauty, indigenous culture and of course unique wildlife. I feel very fortunate to have been able to explore this area over 7 weeks - taking this time enabled me to experience it rather than rushing around from place to place. I genuinely feel envious of those who are lucky to call this part of Australia home and can’t wait to get back there again.

Kakadu National Park, arguabily Australia's most famous National Park - as well as its largest - its huge - don't underestimate how big this place is! With nearly 20,000km (12,500miles) of natural beauty to explore, it's home to 2,000 plant species, one third of all Australian bird species and approx one third of all Australian mammals species. Kakadu National Park consists of numerous habitats including Savannah Woodlands, Sandstone escarpments and stone country, endless floodplains, wetlands and mangrove lined coastlines. It is listed twice on the UNESCO world heritage list for its outstanding natural and cultural values - not too many national parks worldwide can claim to this. Aboriginal people have occupied these lands for tens of thousands of years and its rock art is one of the longest historical records of any group of people anywhere in the world.

There is a small entrance fee to enter Kakadu National Park. Check out this link to view prices relevant to you, where to purchase this pass and how this fee gets distributed and allocated throughout the park. This pass is valid for 14 days and accommodation and camping fees are extra.

Traditional owners of country - Bininj in the North of Kakadu and Mungguy in the South of Kakadu. The Kakadu region is culturally diverse. The Aboriginal people in the region are from a number of different clans, often speaking different languages and in some cases upholding different traditions. Clans consist of two or more family groups sharing ownership of an area of land. Kakadu has about 19 clan groups.

Our accommodation - Mardugal 2 Campground - This campground is located 55 kilometres (35 minute drive) South East of Jabiru along the Kakadu Highway in Central Kakadu National Park. From Darwin to Mardugal 2 - the best route would be to drive east along the Arnhem Highway to Jabiru. Jabiru is approximately 300 kilometres away by car (3 hour drive) east of Darwin. 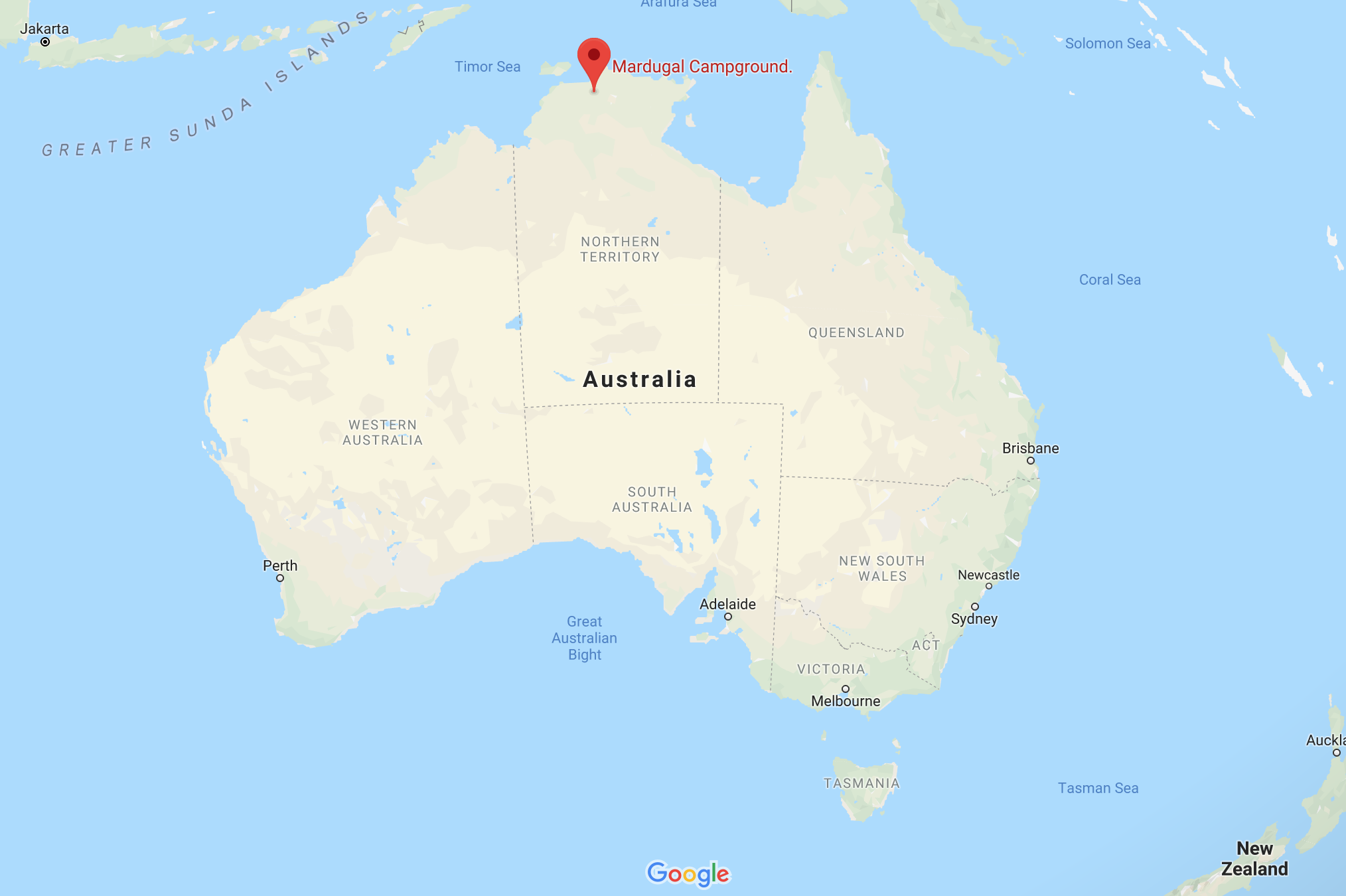 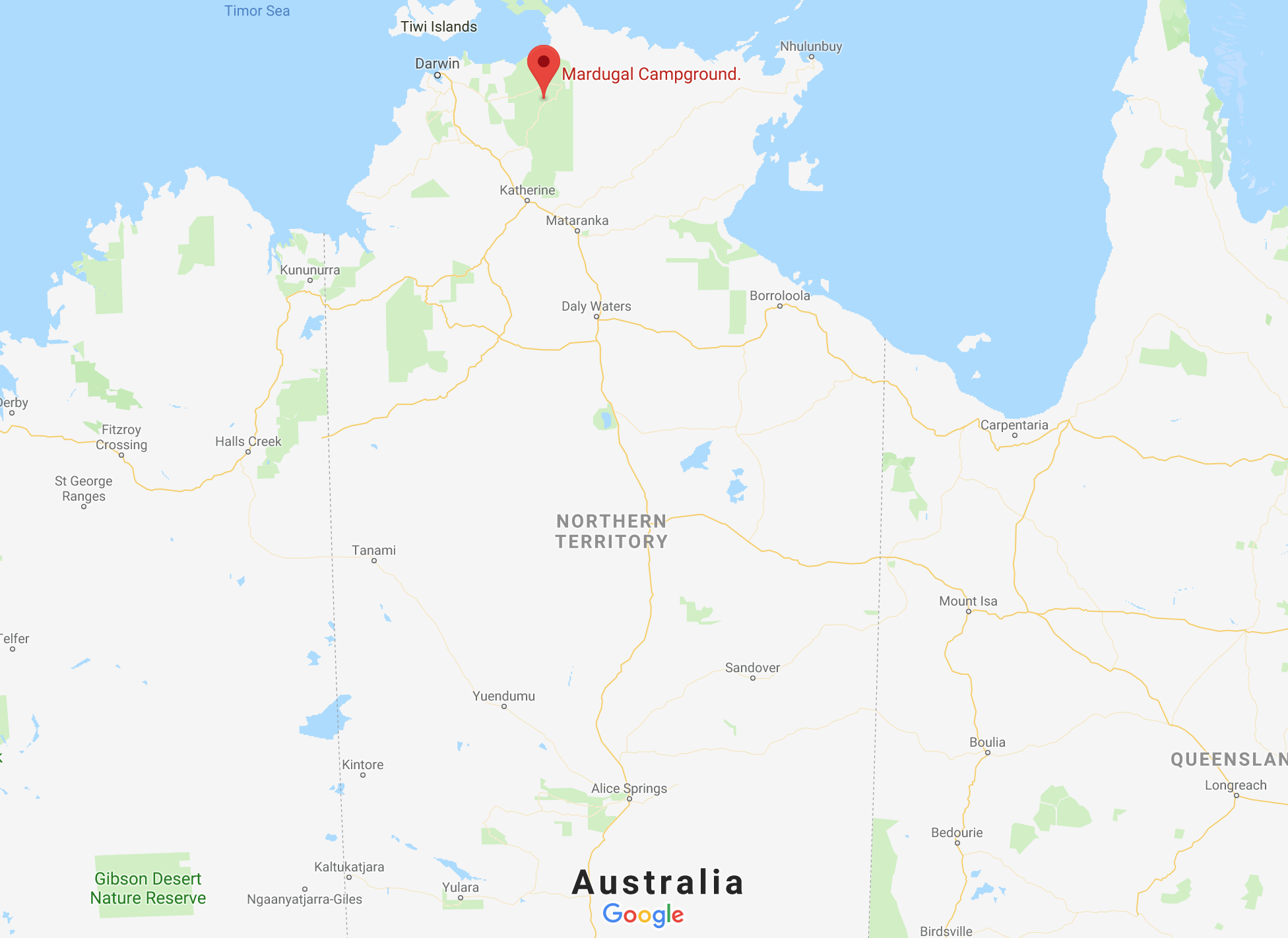 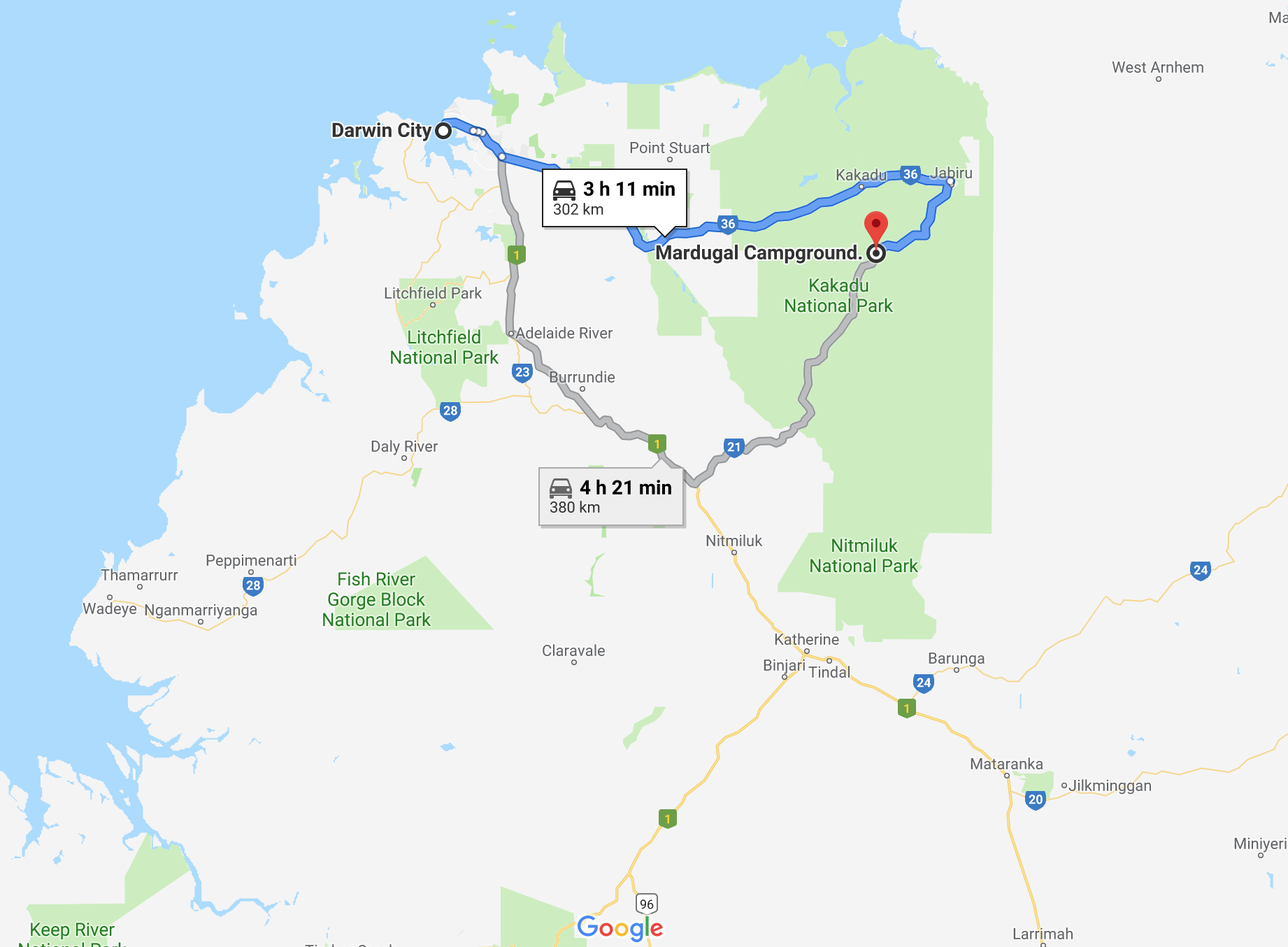 Animals sighted - NOTE: Only animals positively identified have been included. These animals were sighted across all locations whilst visiting Central Kakadu including Mardugal Campground and associated walks, Yellow Water Billabong, Nouralangie Rock and Anbangbang Billabong.

Our first stop in Kakadu National Park was camping at Mardugal 2 campground. The endless online research I had conducted pre trip made me a little anxious about even finding a vacant site, not just at this campground but any campground in Kakadu National Park. We were travelling at the end of the peak and at the beginning of the "build up season" (where temperatures soar and humidity increases almost daily) but still - the consistent theme of my research and on the majority of on-line forums was - be there early - at 10am sharp to avoid disappointment and missing out on a campsite.

On arrival (at 10am on the dot) we found we had the entire campground to ourselves - ALL the campsites bar one were available - I was shocked! This was a pre-curser for the rest of our travels in the park - we had absolutely no problems finding fantastic campsites anywhere within Kakadu National Park - I wonder if that would have been the case if we had visited in the middle of peak season?

The other major surprise for me as a “southerner and a keen naturalist” was that you could just collect fire wood anywhere within the park. Down south especially in National Parks, this is a huge “no no” and is actually illegal as dead wood provides important habitat for small mammals, reptiles and invertebrates. Up in Kakadu and The Top End it is all up for grabs.

Mardual 2 campground was great, we had a quiet shady spot, surrounded by Pandanus Palms and a large contained fire pit, all of which was only a 5 minute walk to amenities including toilets and most important of all... a refreshing shower - which after a long hot, humid day exploring the park was pure joy and added a little bit of "luxury" to our camping experience.

We were joined each night by resident Sugar Gliders and we were even able to determine where their day resting hollows were which enabled us to observe them each dusk when they cautiously appeared as they set off exploring the Pandanus Palms around camp, and to top of the perfect camping site, each night the sky was clear and full of those amazing outback stars stretching from horizon to horizon - which also included witnessing numerous shooting stars, resulting in multiple wishes being made.

From Mardugal 2 Campground we explored the following areas.

The dawn cruise on Yellow Waters Billabong - Wow! What a memorable experience! A life long dream to be out on this famous fresh water wetland watching the sun rise over Kakadu National Park - it was that picture perfect scene everyone hopes for at Kakadu, the famous large orange sun with the red and yellow skies rising slowly over the eastern horizon.

Even though the boat was fully booked it still felt like the sunrise was all yours. Our guide was a local Aboriginal man and was quite the character, he had fantastic environmental and cultural knowledge. We encountered incredible birdlife as well as numerous Esturine Crocodiles (Saltwater Crocodiles), a Golden Tree Snake and even a couple of Water Buffalos and Feral Pigs.

Highlights for me this particular morning were seeing my first ever Comb-Crested Jacanas - which were far smaller than I was expecting, as well as great sightings of Azure Kingfishers, Forest Kingfishers and even a Little Kingfisher.

We went back to camp, cooked up some breakfast and relaxed through the heat of the day. I decided to slowly walk the Gungardun Woodlands loop trail nearby and found some Red-tailed Black-Cockatoos, Black-tailed Tree Creepers, Leaden Flycatchers and Olive Backed Orioles.

In the late afternoon we drove to Nouralangie Rock where Aboriginal people once lived for thousands of years. We viewed all three main Aboriginal Rock Art work galleries where we learnt about Namarrgon, the Lightining man! Did you know that Kakadu National Park has one of the greatest concentrations of Rock Art work anywhere in the world? The vistas over the sandstone escarpment at Kuwarddewardee lookout during the late afternoon were absolutely stunning - just breathtaking! It was extremely peaceful sitting on the rocks listening to the birds calling and looking out across the endless Savannah - a land that had barely changed for thousands of years.

What would tomorrow bring?

The following day we explored Anbangbang Billabong (not far from Nouralangie Rock) both in the early morning and late afternoon - There is a easy 2.5km loop trail around the Billabong which we walked on both visits. It’s a beautiful, non strenuous walk and you are generally in the shade provided by the Melaleuca trees and no matter where you are you have Nourlangie Rock and the Sandstone escarpment as the backdrop to the Billabong - classic Sandstone Kakadu country, just stunning.

On both our walks the Billabong was full of birdlife as well as numerous sightings of Agile Wallabies coming to the waters edge to quench their thirst.

We didn’t see a Salt Water Crocodile on the morning visit, but on arrival in the afternoon we viewed a big one in basking in the sun on the edge of the Billabong. A White-necked Heron walked closely behind the Crocodile, I was hoping it may gain the courage to jump on the back of the Crocodile - wouldn't that be a sighting? But the bird was wise and decided otherwise... Other highlights that afternoon being Red-tailed Black-Cockatoos flying noisily into Melaleuca trees adjacent to the Billabong, cautiously observing their surroundings before flying down to drink at one of the small puddles next to the billabong.

Other highlights being sightings of Lemon Bellied Flycatchers, White-necked and White-faced Herons hunting in the shallows. Other birds included numerous Plumed Whistling-Ducks, Magpie Geese, Royal Spoonbills, Pied Herons as well as the constant call of Whistling Kites as they circled above the Billabong. I was able to capture some images of most of these birds as well as a female Red Winged Parrot on the drive back to camp.

Driving to Anbangbang Billabong in the afternoon provided us with a different type of experience/highlight, for me - but maybe not my wife - driving through a traditional fire burnoff.

Traditional burnoffs are still a common land management practice in the top end, a way to burn away dry vegetation and to promote active green re-growth as well as regenerating the bush. These burnoffs are very common and as the trip continued we drove through similar burnoffs in multiple locations across the Top End. On the way to Anbangbang we could see a huge plume of smoke in the distance, we gradually came closer and closer, until the smoke was so thick you could hardly see in front of you - we slowed down, put our hazard lights on and cautiously continued on and before we knew it there were flames either side of the car with the heat to match - being inexperienced in this scenario we weren’t quite sure if we were doing the right thing but we were right in the middle of this burnoff now so there was no turning around and then we came across a couple of vehicles travelling in the opposite direction - the occupants of those vehicles had the same looks on their faces - are we doing the right thing?. We continued on and before we knew it we were on the other side - out of the burnoff, the flames and the smoke disappeared in the rearview mirror. An exciting experience indeed.

NOTE; Just to clarify that not at any moment did we feel as though we were in danger. See videos below

The next day before we packed up and moved accommodation, I spent a few hours in the morning exploring around camp - I walked down to the Mardugal one campground (the powered camping area of Mardugal campground) as well as walking the short Mardugal Billabong Walk. I was able to get some great images of a Blue Winged Kookaburra and I also encountered a pair of Shining Flycatchers.